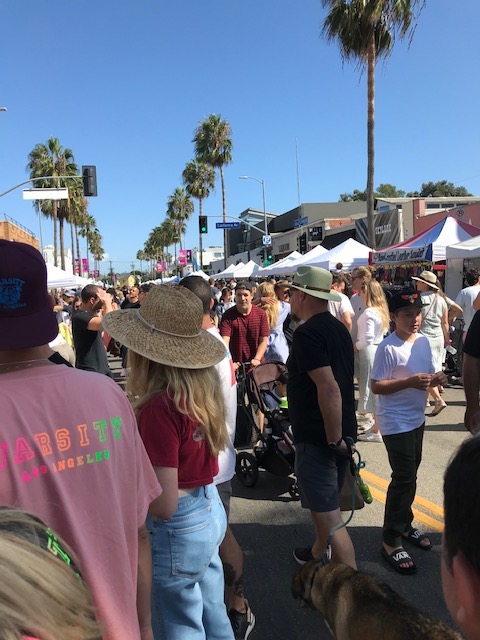 The partner LOVES crowds.  I don’t.  If we both get blown to smithereens in some random terrorist bombing you know who to blame.

The annual Abbot Kinney Street Festival in Venice, so named for a famous conservationist, has been a part of the local scene since God was, like, nine.  And I’d never been.  For someone who spends part of his life in a big creative community, the small town southern boy in me still gets freaked out around crowds of disparate people.  Small town southerners have a tendency to swim in familiar ponds with their own kind.  It’s a tendency I find myself fighting even now.  “Let’s get plenty of sleep because we’re gonna be on our feet for a loooong time tomorrow.”  The partner says this to cut me off before I can say, “I’ll go, but just for a bit.”  I’m convinced when someone knows you well enough to cut you off before you even know what you’re gonna say, it’s time to go your separate ways.

The day was hotter than four hells, but there was a breeze so there was at least that.  When I say there was a sea of people, I mean I couldn’t tell where they all stopped and the nearby Pacific began.  I couldn’t even think straight.  A woman sporting a pair of wings somersaulted her way through the stream of people headed in two different directions.  A vacationing Santa Claus nearly ran us over with two Afghan Hounds.  Runaway dogs are my second least favorite thing about seas of people.

But as we made our way deeper into the crowds, I began to notice something strange.  This was not just a sea of people.  This was a sea of beautiful people.  Now listen, I’ve lived in LA for a long time and, true, there are beautiful people everywhere.  But they’re sort of sprinkled in with everyone else.  This was like nothing I’d ever seen.  And I’m not talking about when you go to some bar or beach and you find yourself looking around like, “Lord, but there are some good-looking folk out here today.”  No.   Every single one of them jaw-droppingly gorgeous.  I was truly overcome.  It was as if I’d been dropkicked into that Twilight Zone episode but I was the pig lady and everyone else wasn’t.  “Do you notice anything?” I asked the partner, who said nope before dashing off to a vendor selling chakra-aligning bracelets.  Stepping away from the teeming mass to catch my breath, I staked my claim next to a fence to take it all in.  The guys next door were peddling water from a volcano in Hawaii.  Somebody called Zhen Nymph was selling – hell, I dunno what they were selling.  Anyone who hates even the idea of California would have been in seizures on the ground.  I tried to remain calm and take it all in.  Whenever I’d see someone who was merely attractive, I’d think, “Who the hell let you in?”  Jaw-dropping.  Like, the most amazing elbow on some guy you’ve ever seen, or a kneecap on some chick that made you feel like you’d never even seen a kneecap before.  It was as if everyone was so stunning, you had to look away from the parts you’d ordinarily look at because if you didn’t those parts would burn the skin off your eyelids.

“Do you know who that is?” David Cassidy circe 1974 asked from his own piece of the fence, pointing to a sitcom star grabbing a taco bowl from the nearby vegan truck.  I said I didn’t, even though I did, in hopes he’d keep talking.  I was staring at the place between his eyebrow and the mane of hair pushed  behind one of his tiny flawless ears.

“Let’s go in here, the partner said, pulling me toward an upscale aromatherapy shoppe.  Everything on Abbot Kinney is upscale, so even though I don’t remember there being a pe on the end of shop, you can bet your ass it had one.  The pint-sized runway model turned me around as we entered and rubbed something wet on the back of my neck.  “PEPPERMINT OIL!” she hollered over tunes a regular-sized runway model scratched from a turntable near the front door.  “FOR STRESS!”  Before my germaphobe mind could wonder where her hands had been and why Rihanna was warning, “Bitch Better Have My Money” when they were trying to calm everybody down, my shoulders drooped with an overwhelming feeling of stillness.  “It’s good, right?” the partner asked as she spun him around and slathered his neck as well.  He knows what all this crap does.  We’d only been in the joint five seconds and he’d already snatched up a vile of sage for the Muji diffuser I gave him for Christmas.

Leaving the store, my shoulders drooped in a different way when I realized I’d plopped down $30 for a vile of bergamot oil like it was a Rembrandt at a fire sale.  “I’m so happy you spent some dough on something frivolous,” the partner said.  “Well, I”m not,” I said, right before my neck got really cold and tingly.  “Wait – is your neck—?” I asked before he cut me off.  “It’s getting cold, right?  Isn’t it incredible?!”

A group of Hare Krishnas shimmied past us with tambourines as a silent string of folk strolled  in the other direction.  “Let Jesus Bring You The Story Of Extraterrestrial Visitation,” the string’s posters proclaimed.  “Ask Us How.”  A booth directly across the way said, “One God in the Quran.”  Behind the sunglass kiosk a seriously pissed off man stood on a chair prophesying the time of Christ upon us.  Next to the bathroom line, an old lady sporting a t-shirt that said “I Voted For Him and I Sorta Apologize” talked on a pink plastic princess phone connected to nothing.  Lord, don’t I love LA.

As a perky Reiki master extolled the virtues of Tibetan singing bowls, the partner pulled me into a pop-up patio bar.  “I think they’re giving away lemonade,” he said.  Making our way up the steps and around a trio of potted trees, Sidney Poitier in “To Sir With Love” minus most of his clothes handed me a bottle of IPA from an ice chest with a wink.  “I think we’re in a gay beer garden,” I said to the partner.  “What do you mean?” he asked.  “Did the peppermint oil go to your head?” I said.  “We’re the only guys here – the only guys who don’t look like Greek gods, not to mention the only guys not dancing.”  I pointed to the rainbow balloon arch over the entranceway.  “Oh,” he said.  “I think they’re gonna kick us out if we don’t take off our shirts,” I whisper/hollered.  Knowing if we do the extra ten pounds I’ve been carrying will elicit a wave of projectile vomiting the likes of which we’ve never seen, I pulled him to the steps.  He tossed me a vile and pointed to my neck.  “You need to lighten up,” he said.  I made a mental note to find out if there’s a lesbian beer garden, and if so, to find it.

After a day as long as he warned me about, we finally headed back up the quiet side street lined with 4 million dollar homes that would go for 10 bucks back home.  I felt the tingling in the back of my neck change direction and numb out to a kind of soft soothing throb.  As someone with no problem making sport of my adopted home state, I was somehow suddenly feeling proud of my place in it.

As the sun started to go down, I noticed a helicopter two feel above the horizon line.  Thinking how big the thing was for a helicopter, I decided it wasn’t a helicopter at all, but something much bigger – and then it seemed to morph into a shape more squatty and oval.  And then it disappeared.  Like that.  Not a cloud in sight for it to disappear behind.  “Did you see that?” I asked the partner.  “See what?” he said.  Wondering if the peppermint oil had something else in it, I pondered the dubious possibility that I had just seen a UFO.  I imagined what we looked like from above it all with our peppermint oil and sitcom stars.  If they had some otherworldly sensors that could tell how different we all were down here on terra firma.  Like the Russians before 2016.  I decided, at least from up there, we all looked the same.  With no political differences, religious propensities, or homeland tendencies to swim away from.

A big anxious sheepdog tangled his leash between my legs before two giggly kids raced over to free him.  Without a thought, I reach down and give the pooch a pat.  His coat was soft and stringy and not unpleasant.  The stunning parents smiled and nodded an apology.  “Is there ice cream at the festival?” one the of the kids asked.  “That – and more,” I answered.  In the yard nearby, Margaret Hamilton circa Cora’s coffee commercials said to someone over her rake, “Festival can’t be over too soon for me.”  Ordinarily I would have found myself siding with Margaret.  But on this singular day at this particular time in history, I held a deep sense of gratitude that I’d let go of all my prejudices about throngs of dogs, revelers and beer gardens and allowed myself to soak it all in.  When folk from all walks of life gather to celebrate nothing in particular, magical things can happen.

Connect With Us Via Email